In the end nine members attended the Norfolk Trip, and we had to count ourselves very lucky with the weather, as Sussex was awash whilst our stay in Norfolk remained mainly dry.

We met Thursday morning for breakfast at the Little Chef in 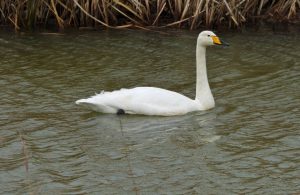 Ely, before travelling on to spend the morning at the Ouse Washes RSPB reserve, where we had good views of our target species, Whooper & Bewick swans, plus a mixture of other wetland birds and raptors and finished off eating  sandwiches at the visitor centre whilst watching Tree Sparrows.

After lunch we took the short journey to the Nene Washes, eventually finding the rather elusive Eldernell view point that allowed good views over an undisturbed area. It was a worthwhile visit with a flock of 19 Common Cranes seen well feeding, even though they were rather distant. Our  other target bird of Short Eared Owl failed to show. We did however have close views of Barn Owl, Plus Sparrowhawk, Kestrel, perched Peregrine, Marsh Harriers, also Kingfisher & Little Egret – out on the washes huge flocks of Golden Plover & Lapwing taking to the sky were impressive as a spectacle, the skyline becoming covered in birds.

We ended the day as some rain eventually started by travelling on to our accommodation, the Caley Hall Hotel in Old Hunstanton, arriving in plenty of time to relax a bit before we all had a very nice 3 course dinner.

Friday after breakfast we took the short journey to Titchwell RSPB managing to be on site by 9:30. The plan was to start with a seawatch as the tide was ideal.  This proved very productive for those that went straight  to the beach, huge flocks of birds sitting on the sea, 50+ Velvet Scoter as a flock, hundreds of Common Scoter, an official count of 200 Long-tailed Duck was taken at one point, also plenty of  Red breasted Mergansers and Goldeneye, up to 6 Slavonian Grebes, Red throated divers flew by, plus a Great Northern Diver flew by later, seen by some.  Sanderling were noted at the tide line.

As the seabirds drifted away, the rest of the reserve was 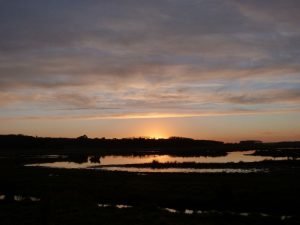 visited. All the usual Duck & wildfowl were around, including Pintail & Pink Footed Geese, Water Rails were seen well.  Noted were the usual common waders plus flock of Avocet, 3 Greenshank, 3 Ruff & Bar-tailed Godwit.  A highlight was a Water Pipit feeding on the bare mud.

After lunch we nipped up the road to Chooseley Drying Barns – A short visit saw 20+ Red-Legged Partridge, a flock of c.1000 Pink Footed Geese flyover which was impressive, also a few Buzzards plus some Hares.

With plenty of time still left, it was decided to go to Roydon Common a large heathland near Kings Lynn for the Hen Harrier roost.  This was a new site for many, luckily it proved worthwhile with up to 2 Male & 1 Ringtail Hen Harrier being seen towards dusk, also noted were a few of the more common heathland species.

Saturday we decided to visit the within walking distance site of Holme Dunes.  The area was alive with singing Skylarks, Meadow Pipits, Reed Buntings, 40+ Linnet, the target species of 20+ Snow Bunting eventually being found, but the hoped for Twite proved elusive and not confirmed.

Nipping along the road for a quick look at Thornham  as another possible Twite site failed, however good views of a close Spotted Redshank and Bar Tailed Godwit made up for the disappointment.

We then went on to Holkham seeing 2 Grey Partridge from 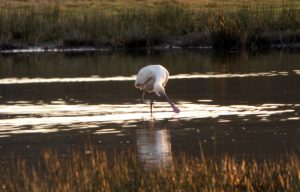 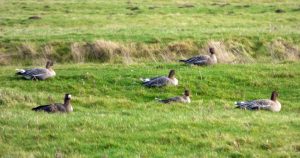 slow to leave also had close views of a Spoonbill that came down near the Car Park at sunset.

Driving back a Woodcock flew across the road in front of us, and a Tawny Owl was heard back at the hotel Car Park.

Sunday was a more relaxed day, when everyone decided  what they wanted to do, with some visiting Gun Hill near Holkham for another attempt to see Shore Lark (which also failed) others going to the Hawk & Owl trust site at Sculthorpe Moor near Fakenham for woodland birds  and Bullfinch & Brambling.  Most also successfully stopped at Lynford Arboretum to see the roosting Hawfinches.  Plus Brambling, Siskin, Crossbill, Marsh Tit & Firecrest were seen by some at Lynford.

All were very happy with the hotel, and thought the trip went very well.