Seven members set off at 9:30AM on a bright sunny but breezy day with previous 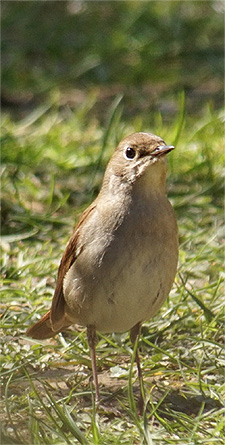 ly reported Scarce (Yellow Legged)Tortoiseshell butterfly and Nightingales being high on the “to look for” list.

The rare butterfly was not reported that day, but Peacock, Comma, Small Tortoiseshell, Red Admiral and Brimstone were seen. Some of the party only stayed until lunch time, and up to that point the Nightingales had been elusive. For those who remained for another walk around this changed in the afternoon with one Nightingale singing, and a bird appeared on the path, long enough for some to get quick record shot photos. The highlights of the morning were a male White Wagtail, and excellent close views of 2 Little Ringed Plovers, Blackcaps were singing and seen, a Willow Warbler singing showed very well, and Chiffchaffs were everywhere.

There were herds of Fallow deer, and 7 spot ladybirds on the fresh nettle leaves.

The day finished with a respectable total of 50 bird species, with the highlight being the Nightingale.

This site uses Akismet to reduce spam. Learn how your comment data is processed.